How long will Australians have to wait to travel overseas again?

While other countries are reopening their borders to international visitors, Health Minister Greg Hunt dashed the hopes of would-be globe trotters earlier this week, suggesting Australia's border would remain closed for a "very significant" amount of time.

It's been three months since Australia imposed the travel ban, barring citizens and permanent residents from leaving the country.

But in a sign the tough border restrictions may be easing, some international students are set to return to Canberra in July.

So will outbound travel be allowed to restart soon after or will those wanting to visit family and friends overseas have to wait years for a COVID-19 vaccine to be found first?

Mr Hunt attributed curbs on international travel as one of the main reasons Australia was successful in containing the spread of COVID-19.

As cases worldwide surpass nine million, driven by tens of thousands of new daily cases in India, Brazil and the United States, Mr Hunt has described Australia as an "island sanctuary". 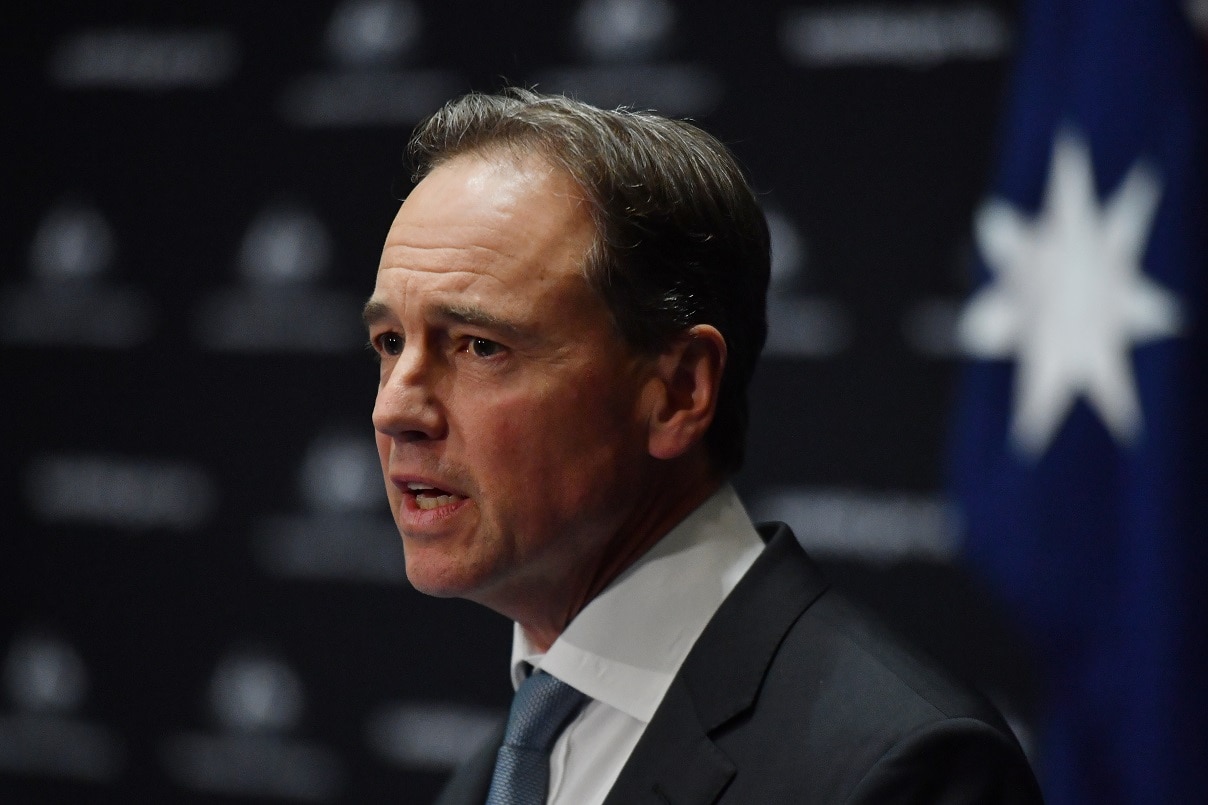 Most worrying for those separated for friends and family overseas, he appeared to suggest international borders will remain shut until a vaccine is found.

Professor Joel Negin, head of the School of Public Health at the University of Sydney, told SBS News that while international travel could start up once a vaccine is developed, there is still a long way to go.

“The vaccine isn’t far off… and let’s say there is a vaccine and it's effective and distributed, then people will be interested in travelling, I think there will be increased amounts of international travel” he said.

“In terms of mass travel and holidays to Hawaii and Thailand and America, that’s going to be a while still I think, like late 2021 or even longer.”

Trade Minister Simon Birmingham has also indicated it could be late next year before borders reopen fully.

Australians can apply for an exemption from the travel ban from the Department of Home Affairs, but these have proved difficult to obtain.

According to the department, exemptions can be granted for travel for business purposes, for aid assistance or on compassionate grounds.

While applicants who have been rejected have complained about a lack of transperancy about the criteria, the department says they make decisions on a case-by-case basis.

In figures provided to a parliamentary committee in May, at least 3,000 Australians had obtained an exemption to leave the country, while more than 1,000 applications had been rejected.

In one case, a father and two sons living in Melbourne were finally granted permission to go to Germany where the boys' mother lives after five applications for an exemption.

What about travel to New Zealand?

As part of a suite of measures to slowly start reopening Australia to international travel again, there are talks of a trans-Tasman bubble to allow travellers from Australia and New Zealand to move freely between the two nations

Plans for a trial flight in July have been put on hold over concerns from New Zealand about state borders remaining closed and new cases being recorded in Australia.

David Beirman, senior lecturer in tourism at the University of Technology Sydney, predicts the trans-Tasman bubble could start about September, and expects wider international travel to start taking place in the first half of next year.

“That is of course if there are no unexpected spikes in COVID-19 infections,” he said. “That looks fairly much on the cards.”

Mr Beriman said the trans-Tasman bubble would help boost the economies of both nations.

“Australians represent about 45 per cent of international arrivals for New Zealand, so to have the Australian market come back again will be a huge burst to the travel industry there,” he said.

“And New Zealanders make up about one-seventh of our international visitors which will also be a boost to the Australian travel industry.” Queensland and Western Australia are still banning visitors, complicating plans to get the trans-Tasman bubble up and running.

Mr Birmingham suggested some states may just have to be excluded from the agreement.

“It will presumably be a case that essentially travellers themselves, airlines themselves… will determine which capital cities airlines put services into,” he said.

Fiji has also expressed interest to be involved in the travel bubble between Australia and New Zealand.

Over the weekend, Fiji’s Prime Minister Frank Bainimarama said travellers would have to limit their travel around the country but would still be welcome.

“We’ll be welcoming Aussies and Kiwis to holiday in Fiji in a manner that is carefully controlled,” he said.

Bali and Thailand are also drawing up similar plans.

In good news for those wanting to travel for work, the trade minister has said business travel to and from Australia may resume earlier than leisure travel.

"I hope that we can look eventually at some of those countries who have similar successes in suppressing the spread of COVID to Australia and New Zealand, and in working through that with those countries, find safe pathways to deal with essential business travel that helps to contribute to jobs across our economies,” Mr Birmingham said.

“I think as a general rule, we might see what we call official travel or businesses travel precede leisure travel and the reason for that is most business-type trips, can be more reasonably controlled than people just doing tours,” he said.

The Morrison government also floated a proposal to allow people entering Australia for business purposes to do a shorter quarantine, rather than the mandatory 14-day period.

Professor Negin supports the decision to reduce isolation time for people returning or visiting from low-risk countries – which may include New Zealand, Singapore, Japan, Hong Kong, and South Korea.

“I think if a country is deemed low-risk then I don’t think you necessarily need that two-week quarantine,” he said.

“I still think there are some quite stringent tracking measures of those individuals that would happen… they should have the app on their phone and followed up by contact traces.”

However, opposition health spokesperson Chris Bowen, said Australians would not accept “a separate set of rules for business people, for some other others”.

What about temporary visa holders?

While temporary visa holders, including workers filling skill shortages and working holidaymakers, can leave the country, they can't return while the borders remain closed.

As international students gear up to come back to Australia, acting Immigration Minister Alan Tudge said there were no plans to grant temporary visa holders a blanket exemption to Australia’s coronavirus travel ban.

However, there have been small gains for some.

Harmandeep Kaur landed in Sydney on Tuesday after she was granted a COVID-19 travel exemption to fly from India on 28 May.

The 28-year-old who works as a registered nurse at an aged care facility in Toowoomba in regional Queensland will return to work after completing two weeks of mandatory quarantine starting from Tuesday, reported SBS Punjabi.

“An exemption for me alone means I am returning to Australia while my husband who is on a dependent visa would continue to remain in India,” she said.

“While I am thankful that I will be returning to my work and home in the next few days, the fact that I will now be separated from my husband has dampened the joy we initially felt.”

The Australian Border Force (ABF) has granted 1,905 travel exemptions and refused 253 applicants between 2 February and 6 May this year.

The highest number of exemptions were granted on compassionate grounds, the ABF told a senate inquiry last month.

How risky is overseas travel?

Even though a vaccine may give Australians the green light to travel, Professor Negin believes it will still be a risky exercise.

He said while travel slowly starts to become part of life again, people must stay vigilant to protect the health of themselves and their communities.

“It’s the same thing we would do if we went to a shopping centre or a movie, it’s not touching your face, wearing masks, it’s washing our hands, being careful not to touch things we don’t need to touch,” he said.

“It’s about being smart.”

Even though a vaccine may give Australians the green-light to travel, Professor Joel Negin believes it to still be an extreme risk.

He said Australians have already adapted to some of those measures, and should keep hygiene and social distancing in mind once travel picks back up again.

“When we start opening things up, whether that be sporting events or travel or concerts, that vigilance needs to remain and that’s what’s going to allow us to continue to travel,” he said.

“As soon as there is an outbreak of cases that hits a certain level from people travelling, the travel will stop, it’s a risk for the whole country if we start importing those cases because people aren’t being careful during their travels.

“It’s quite a heavy responsibility travellers are adopting when choosing to travel.”

Which countries have opened up?

For the first time since the World Health Organization declared the pandemic in March, countries confident they have stifled the coronavirus are bringing back their international visitors to boost economies.

Countries in Europe are slowly beginning to re-open their borders to other members of the European Nation, with each country imposing their own rules on who can enter. Spain has opened its borders for travelers from most of Europe after lifting the state of emergency and lockdown to stop the spread of the coronavirus.

The EU travel ban will end on 1 July. However, people visiting the EU from high-risk areas will have to wait longer for their European holiday.

This may be the case for people from countries with accelerating coronavirus cases including the United States, Brazil, and India.

Holiday goers from low-risk countries will be welcomed into the continent, but each European nation will still set out their own road map for visitors.

Additionally, the Caribbean island nations are already encouraging tourists to visit, as well as Mexico, Ecuador, Cambodia and other parts of Asia including South Korea and Bangladesh.

In Africa, Tanzania and Zambia are opened but tight restrictions are still in place.

Where can I travel?

Until bilateral agreements are introduced, or a COVID-19 vaccine is developed, holidays for Australians are limited to their own backyard.

Mr Birmingham is encouraging people to travel domestically to help revamp the economy.

Last year, Australians spent more than $65 billion on overseas travel, and governments want to see some of that spent on local businesses by taking a holiday regionally or elsewhere. There are currently no domestic border restrictions in New South Wales, Victoria, and the ACT.

Despite Victoria's daily new coronavirus infections continuing to increase, NSW Premier Gladys Berejiklian affirms borders will remain open but is urging her residents to stay away from Victoria unless necessary.

South Australia’s borders have opened to travellers from Western Australia, the Northern Territory, and Tasmania.

South Australia will open its borders to all states from 20 July.

Western Australia will keep its borders closed, as well as Queensland unless the traveller is exempt.

The Northern Territory will open its borders from 17 July, meaning visitors won’t need to self-isolate for 14 days.

Tasmania’s borders remain closed with this decision to be revisited next month.

The post about “How long will Australians have to wait to travel overseas again?" first appeared on the SBS Australia website.

To engage in the latest trends, developments, and opportunities in the promotion of the tourism industry, travel, aviation, and culture across Australia and Latin America, join our community at Tourism Group.