Domestic tourism is ramping up on the NSW coast, but Victoria border closure looms

In and around the Coffs Coast region of northern New South Wales, tourism is the lifeblood of its towns.

Each year, 1.8 million tourists visit the region, the vast majority from the major cities along Australia’s east coast - including Sydney, greater Victoria, as well as south-eastern Queensland and the Gold Coast.

But the market has suffered significant hits due to coronavirus-enforced shutdowns.

Fiona Barden from the Coffs Harbour City Council, says any further changes to domestic borders, including closures with Victoria, will have a major impact on the local economy. 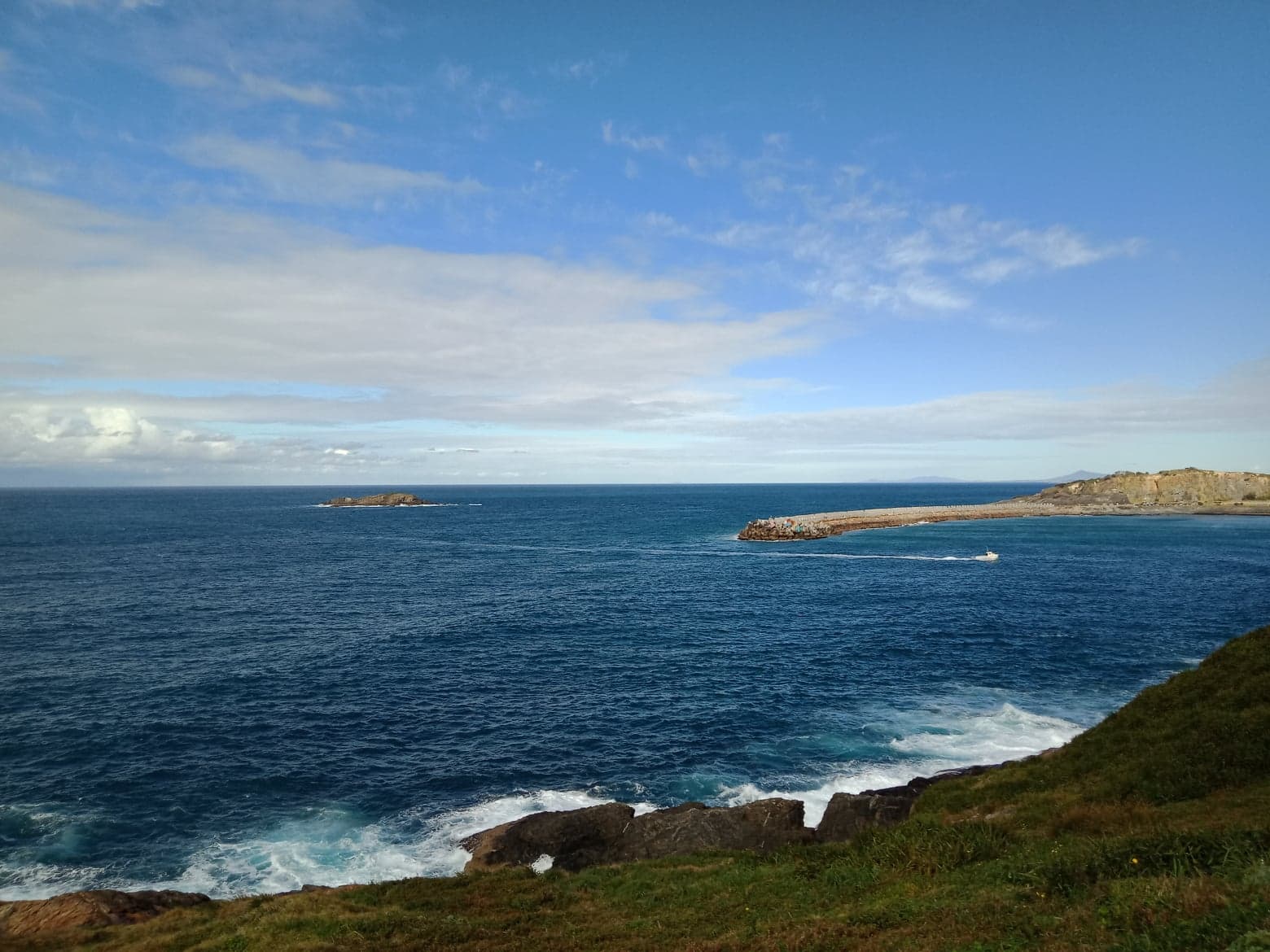 Tourism is a lucrative and essential market for the NSW Coffs region.

“Any loss in visitation is detrimental to us,” she told SBS News.

“We’ve been through fires, floods, and now COVID over the last six months in the area. Our community, we keep saying our businesses here are very resilient, and they keep bouncing back, but having too many straws that break the camel’s back becomes hard for any business operator.”

On Monday, Victorian Premier Daniel Andrews announced his state's border with New South Wales will be closed from Wednesday due to a spike in COVID-19 cases in Victoria.

Fortunately for the region, overseas travellers only account for roughly five per cent of trade, meaning despite international travel bans, the north coast has seen a surge in trade since lockdowns in Australia loosened.

On 1 July, the iconic Big Banana - also the biggest fun park between Sydney and the Gold Coast - reopened to a flurry of visitors.

With more than 100 staff on its books, general manager Michael Lockman said the return to normality will help stifle the freefall of jobs in the region. 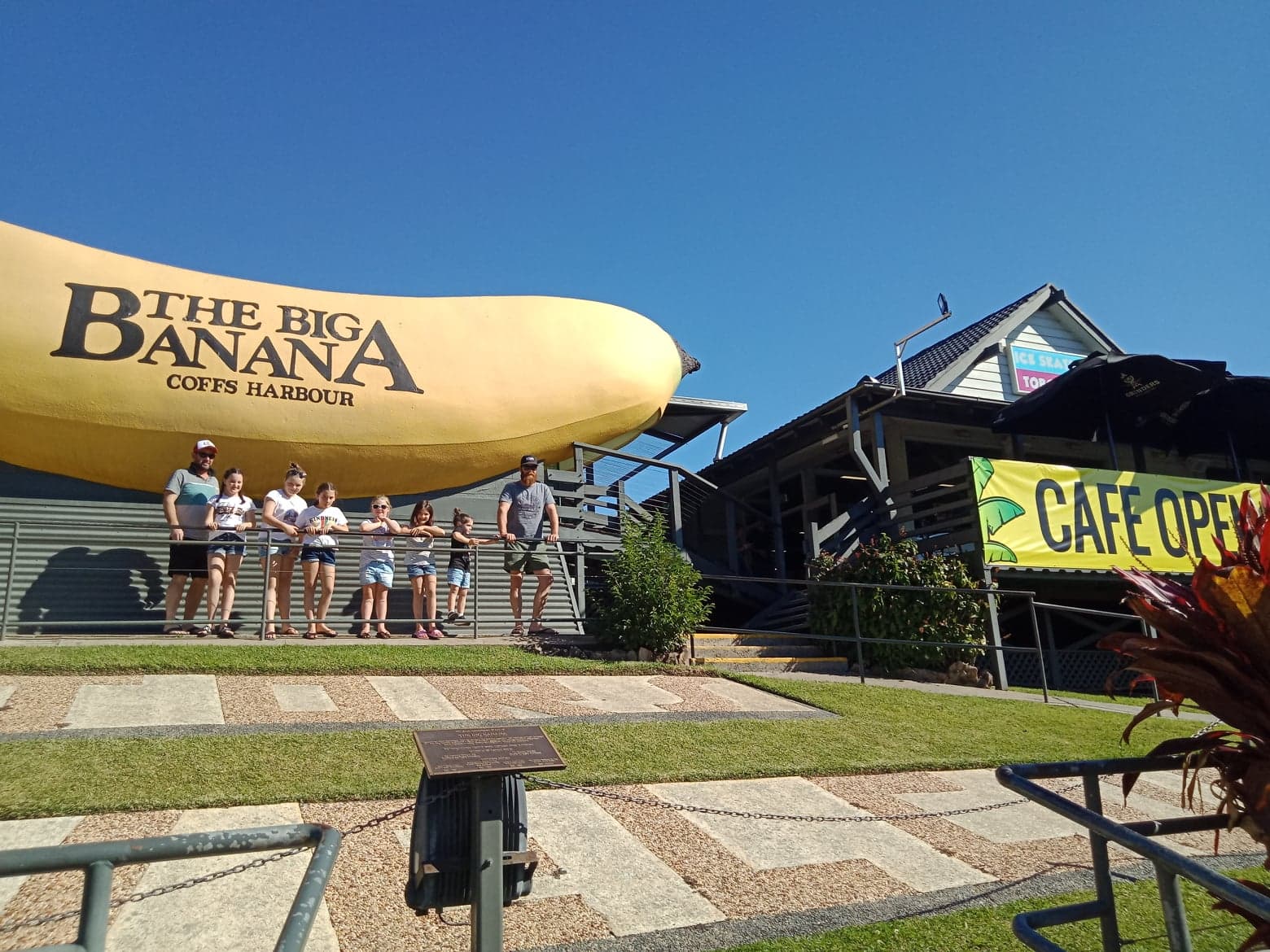 The popular Big Banana fun park reopened at the start of July.

Since the lockdowns were enforced, 11.2 per cent of jobs in the Coffs Harbour-Grafton regions disappeared. The unemployment rate in Coffs Harbour now stands at 5.9 per cent.

“I think it’s a breath of fresh air to have the economy kickstarted a bit,” Mr Lockman said.

“I think it makes a big difference to the community. And we employ a lot of young kids as well, we give a lot of people their first job. So that’s an important part as well.”

Sean Hone, who manages the four council-run caravan and holiday parks on the Coffs Coast, which employ 70 people, says his sites are almost entirely booked out.

The Lakeside Holiday Park in Woolgoolga is at 90 per cent capacity and cannot accommodate any further guests, he says.

“Generally, considering what we’ve been through, it’s really inspiring to see the growth. We’re matching, or close to matching, where we were last year.”

“Obviously it’s an unknown period with COVID, we’re just monitoring it every day and adjusting accordingly, but the signs are really positive. So if we can keep up this, that’s all I can ask really.” 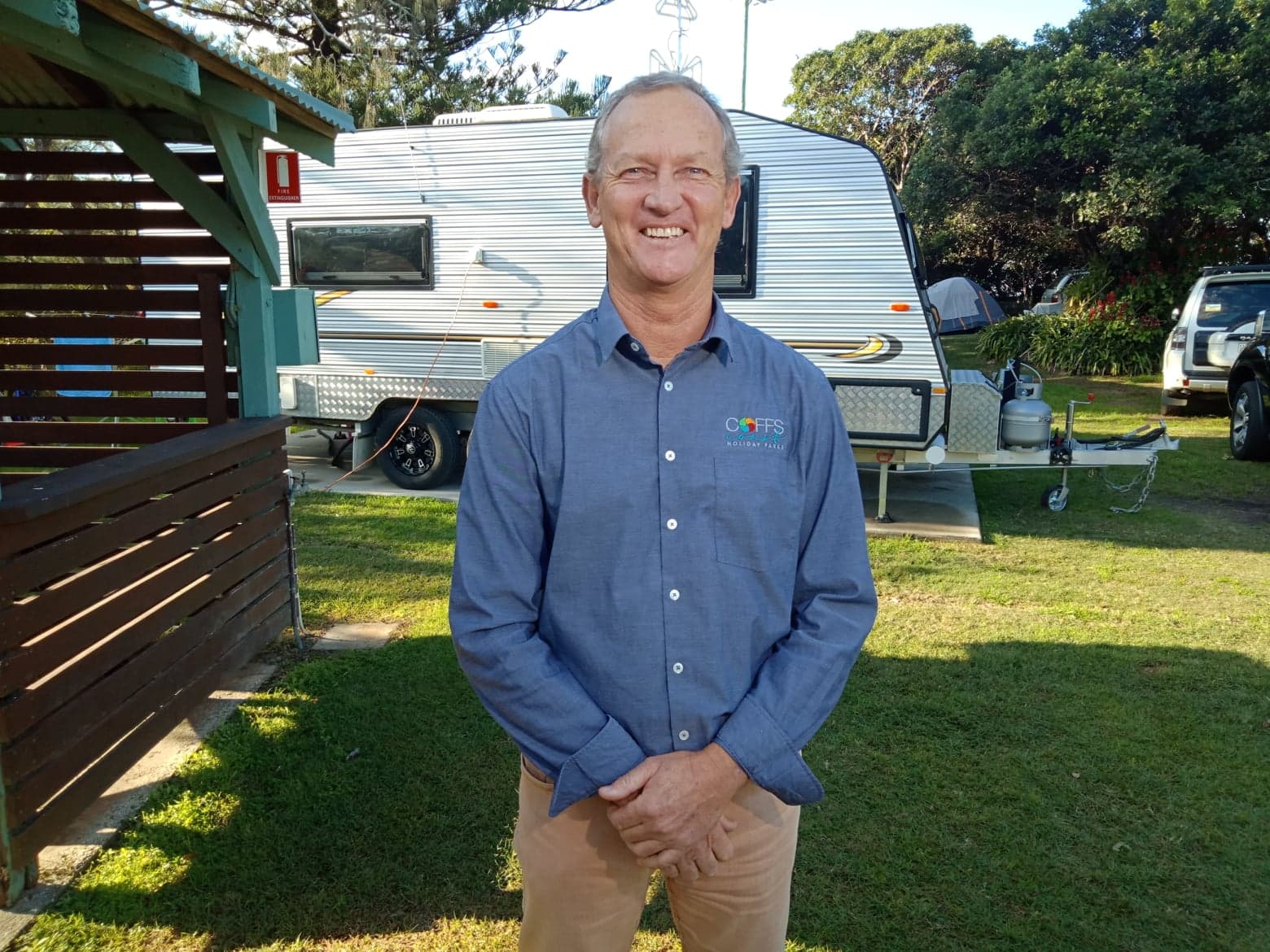 Along with countless beaches along the north coast, the region is home to several national parks, making it a popular camping and fishing destination.

Glenn Storrie, the manager of the NSW National Parks on the Coffs Coast, says visitor numbers are soaring.

“There seems to be a real desire to get out and about, get a bit of space and air and reconnect with nature.”

“Our camping areas on the coast are booking up fast for these holidays, which is a lot more than we would expect at this time of year, being winter. People are really looking back at what’s really important to them.”

On Muttonbird Island, a popular whale-watching site, visitors have ranged from day-trippers to families on an extended weekend away. 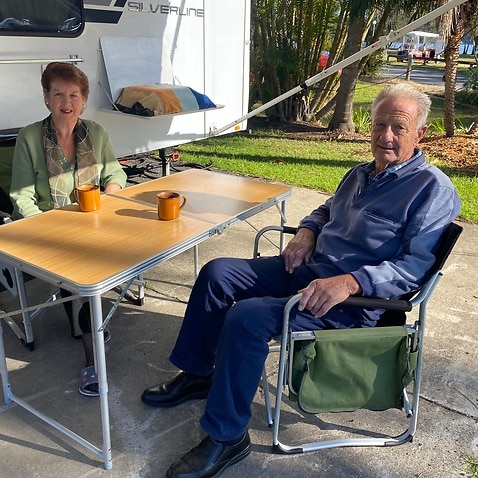 Among them are Mario and Therese who made the two-hour drive from Harrington, NSW, for their 40th wedding anniversary.

“It’s a bit of freedom again, like you’re off a leash, you know what I mean?” laughed Mario.

Other visitors, including young Sydney couple Andrea and Gerard, say such getaways were once taken for granted before the shutdowns.

“Just the air, the breeze, the sounds you know, just seeing other people, you don’t even realise how much you missed those things,” Gerard said. “It’s now much appreciated, so I get it now.” 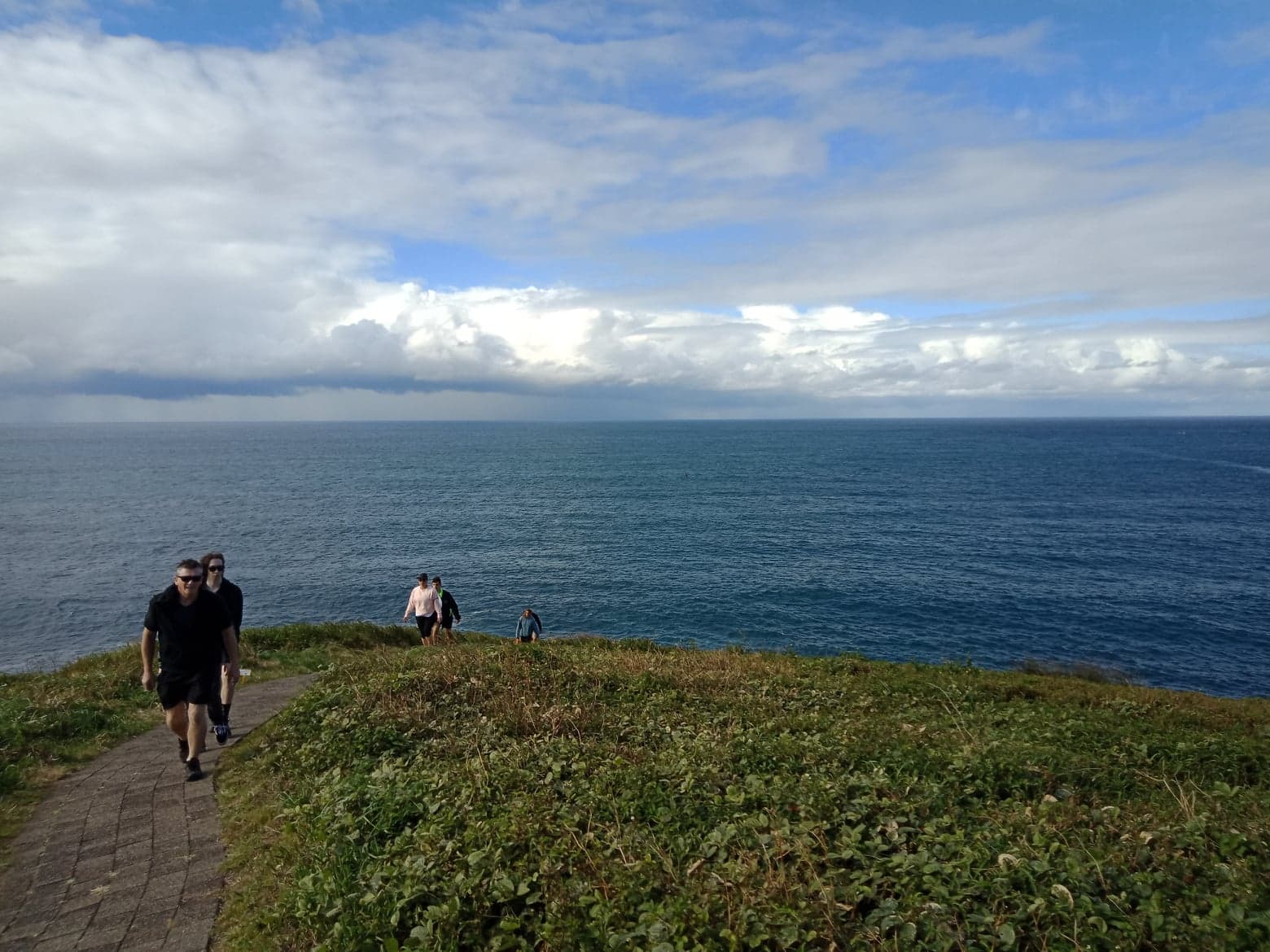 But with tourism operators required to adhere to strict health and safety precautions, Mr Storrie says many budding campers are being turned away for not booking ahead of their arrivals.

Visitor bookings have now become a requirement as part of the COVID-19 response.

“Making people book before they come has been a huge task, and there’s been a lot of people who have arrived and haven’t had a booking and then they’ve gone to places where they shouldn’t camp,” Mr Storrie said.

“So there’s certainly been an increase in us needing to get out and about and patrol and talk to the community about what’s appropriate.”

But, Mr Lockman says, any so-called pressure of the tight safety laws has been easily dissipated by the gradual resumption of normality.

“Obviously there’s a bit more money we need to spend on sanitisers and staffing and stuff to make it all safe, but it’s just great to sort of have it start to feel a bit more normal.”

The post about “Domestic tourism is ramping up on the NSW coast, but Victoria border closure looms" first appeared on the SBS Australia website.

To engage in the latest trends, developments, and opportunities in the promotion of the tourism industry, travel, aviation, and culture across Australia and Latin America, join our community at Tourism Group.